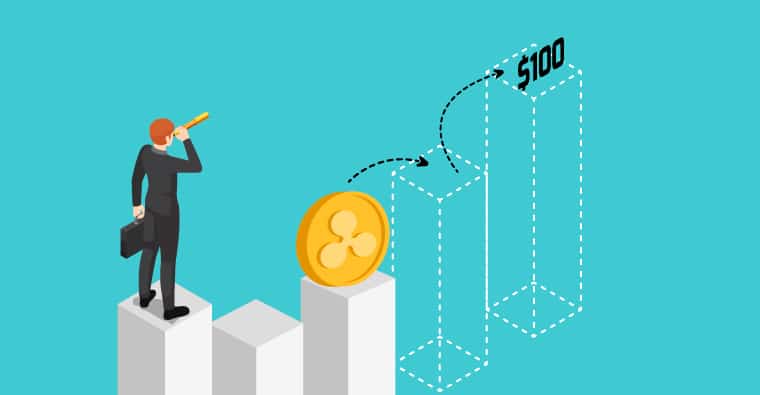 Despite the crypto market housing 10,000+ cryptocurrencies, a handful of names have established a distinct image among the users. One such name is Ripple, a private FinTech firm best known for its cryptocurrency XRP.

As the sixth-ranked crypto on CoinMarketCap, Ripple’s market performance is a given. That is why the crypto managed to survive despite the ongoing dispute against the SEC. Some experts even believe that it will cross the 5 dollar mark in a year.

Given its worldwide popularity, many traders speculate about its price. Moreover, some even ask if XRP will reach 100 dollars. While there is no certainty, here is an overview of the price predictions.

What Is Ripple(XRP) and How Does Ripple Work?

As already stated, Ripple is a private FinTech firm that offers global payment services via Ripple Network. The payment network is built on its consensus ledger, named XRP Ledger. Unlike most of its competitors, Ripple did not release a token for users’ peer-to-peer needs.

Ripple did not instantly shoot off the ground as its value remained inconsequential for several years. The crypto traded around 0.01 dollars before 2017, when the crypto market first picked its bull run. By April, Ripple reached 0.05 dollars, and a month later, it was placed at 0.25 dollars.

The crypto never looked back from that and reached 3.84 dollars a year later. With over 35 billion dollars in market cap, the crypto is currently trading near 0.78 dollars.

As stated above, the Ripple network uses its consensus algorithm based on independent nodes’ reliability. The protocol validates transactions and accounts using the nodes, and once the nodes agree, they can pass validation.

It is the only way that the network undertakes transactions, and it eliminates the issue of double-spending. The issue is prevalent because of crypto’s relatively new market entry and selective individuals’ expertise on the subject.

As soon as the XRP system detects a transaction, it deletes all the subsequent data, restricting users from spending the crypto twice. It makes Ripple’s payment architecture the same as the SWIFT global fast payment mechanism.

Despite Ripple’s ongoing issues with the SEC, the crypto gained the 50% value it lost in late 2020. At the start of 2022, it is trading around 0.78 dollars, which is heavily below its all-time high. However, experts believe that crypto will again breach the 2 dollar mark in 2022. In a similar fashion, the experts expect Ripple to cross 3 dollars in 2023 and 4 in 2024. You can find more details here for the long-term XRP predictions.

Even as one of the top cryptocurrencies, traders can still buy Ripple for a far lower price. That is why many users, newcomers, and veterans alike, assess Ripple’s future. Needless to say that predicting cryptocurrencies’ future is challenging, given their volatile nature. The case is even tougher as Ripple is facing a case against the SEC. However, the crypto packs the potency to surge up to 2-3 dollars in no time. Thus, traders can perceive Ripple as a potential trading option.

XRP is one of the most popular yet cheaper crypto alternatives in the market. The crypto has shown potential to dominate the industry despite facing a suit against the SEC. The venture packs the right set of tools to discard it and still stay within the top ten cryptocurrencies. Since experts expect Ripple to cross the 3 dollar mark within a year, it is a viable trading prospect.